Improve the click-through rates of your banner ads.

Test different positions for your banners, starting with above the fold and to the left of the content.

Google recommends placing banner ads above the fold and to show off your content.

According to one test survey by Infolinks, where eye-tracking was used to find which ad units were most noticed by users, the best performing ads were near the top with 80% visibility, followed by ads found above the fold on the left-hand side with a 73% visibility.

NNGroup analyzed over 1.5 million eye-tracking fixations from hundreds of sites to understand how people read on the web. Here’s what they found:

Add advertisements that are relevant to the content and the users of your site.

If the ads that are being served on your website bear no relevance to its content, you’re just throwing impressions at the wall and hoping something sticks.

Keep your design simple by including only a relevant headline, image, and copy, plus a single reason to take action.

Add less information to your ad, visual and textual. Use a single object, image or CTA, and a concentration point, headline or copy, to drive the message home.

For example, a high CTR banner ad from Gillette includes a photo of the product against a black background which is the single focus point or an eye-catching object, has a single distinguishable call to action “Buy now”, a single headline “Fusion ProGlide”, plus the company’s brand name. 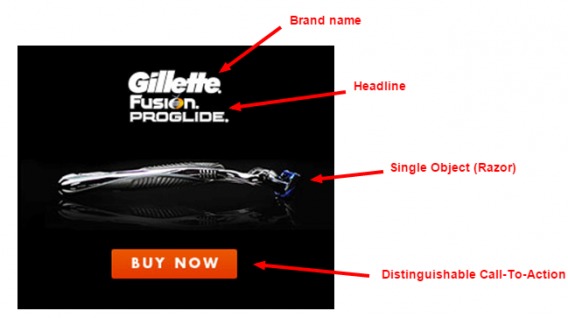 Here’s what Gillette did well:

Put time and effort into testing which font and layouts work best for your ads.

When designing banner ads, your focus is to get an emotional impact on the viewer, not just facilitate readability. Typography affects users’ emotions and does persuade users to take action, so spend some time choosing a couple that complements the other components of the ad and helps with readability.

Terry L. Childers and Jeffrey Jass authored a study suggesting that the right typography, coupled with a brand’s established image, reinforces the brand values in the consumer’s mind.

For example, in 2012, writer and filmmaker Errol Morris conducted an interesting experiment in The New York Times disguised as a quiz titled “Are you a Pessimist or an Optimist?” The purpose of this quiz was to find out if the participants’ decisions and perceptions of the truth in a statement could be influenced by a change in font typeface. The quiz made use of six different typefaces and over 45,000 people took the test. The results: Baskerville was the font that had most people agree with a statement, while Comic Sans was the most disliked and disagreed with.

Use contrasting colors and vertical layouts to avoid banner blindness and make your banners stand out.

Try out bigger ads that put the viewer in the line of least resistance. This means that readers don’t have to spend any working memory on differentiating an ad from the content, or stay on guard against accidentally clicking on one. According to Google’s published findings, vertical ad units are the most viewable.

Design ads based first on principles, contrasting colors, and afterward worry about specific emotions for example, blue is dependable, trustworthy, and orange is friendly, cheerful.

Use colors that are consistent with your site’s design strategy as colors increase brand recognition by up to 80%. For example, if your company’s logo is yellow, use yellow in the banner ad, contrasting it with black. If yellow adheres to other design solutions on your site, use it regardless of the psychological principles of color importance, for example, that yellow is commonly used for safety signs.

For example, this ad: 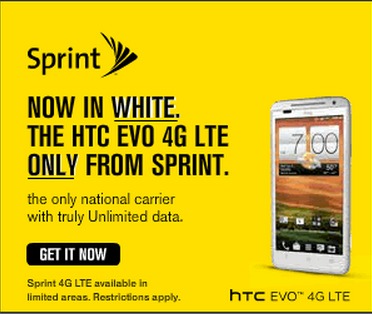 Test different types, sizes, and layouts of ads, rather than guessing or simply accepting best practices.

What is applicable, generally may or may not necessarily work for you. For instance, while vertical ad units may be the most viewable ones in a general sense, you may still want to test by choosing an ad size that actually complements your page.

Unconventional ad placement and layout can make your ads more noticeable and user interaction with them more likely.

Use ads for conversion