Use psychology in crowdfunding campaigns

Increase your revenue and run a successful crowdfunding campaign.

Reduce the consumer’s perceived risk by choosing an all-or-nothing model that returns the money to them if you fail to hit the target.

A crowdfunding model study analyzed 47,139 campaigns from Indiegogo, a crowdfunding platform, with the option to choose either KIA (Keep it All) or AON (All or Nothing) models. Even though most people chose KIA projects, AON projects were more successful:

Include a breakdown of your budget to enhance transparency and trust.

Most project creators describe their projects using aggregate framing. They need a certain amount of money to accomplish a project. With that approach, potential donors can’t appreciate the value of their donation. They can’t envision the specific benefits that they’re providing.

Separate the project into specific costs. Specify how much money will be attributed to each aspect of your project. When you provide those financial breakdowns and roadmaps, potential donors are more likely to fund your project.

Convey your reputation by including relevant information about your education, industry experience, and past successes.

Guerini, Franzoni, and Rossi-Lamastra summed it up in their paper on crowdfunding success: “Potential backers are usually unsure of proponents’ abilities and do not know whether proponents are trustable… Therefore, considerations of quality and trustworthiness are important when deciding to support a project.”

Donors, someone they’ve never met before, must feel safe giving you their hard-earned money. That’s why you can’t rely on the greatness of your project alone. You also need to convey your personal background and reputation. Digital startups are more likely to secure funding if someone on their founding team holds a doctoral degree. Other research has found similar effects with MBA degrees.

Have you ever launched and completed a similar project to the one that you’re promoting? If so, then mention it. That past success will make potential donors more likely to invest.

Contribute to other crowdfunded campaigns to encourage reciprocity.

This has two main facets:

Indirect reciprocity plays a powerful role in online communities, such as open-source development, and crowdfunding communities are no different. For example, potential donors in the Kickstarter community are more likely to fund your project if you’ve donated to other Kickstarter projects.

Trigger their self-awareness by offering eye contact and framing your descriptions in the second person.

Look into the camera when you record your video. When we encounter a pair of eyes, we become self-aware and more likely to engage in prosocial behavior. When filming, do whatever it takes to look into the camera:

You can trigger self-awareness by incorporating 2nd person pronouns like you and your, into your project description. Those self-referencing pronouns cause people to relate your message to their own life, which increases self-awareness.

You could also achieve a similar effect by incorporating a narrative into your description. Narratives help overcome resistance in two ways:

Compare giving with the personal extravagances made by the giver.

We often perform good deeds simply because we feel guilty. Be careful triggering that guilt, though. If you approach this strategy incorrectly, it can backfire. Reference an inexpensive hedonic product to boost people’s intentions to donate. Savary, Goldsmith, and Dhar were collecting donations in a field experiment. Depending on the group, they compared the price of a donation to a specific product:

Hedonic comparisons influence more people to donate. Since those products are associated with self-indulgence, people feel more selfish if they would rather purchase that hedonic product than donate to the cause.

Make a personal connection with your audience for a stronger effect.

In another study, the amount of money that people donated to a sick child depended on the amount of information that those people received about the child:

When writing copy, reinforce your personal identity. Reveal certain details about yourself:

That personal information will strengthen your identity. Suddenly you’re not some random statistic, you’re a real person. With a real person behind the project, potential donors will experience a stronger feeling of guilt and thus, a stronger urge to fund your project.

When you publicize the identity of potential donors, they feel greater pressure to donate. For example, participants in a dictator game were more likely to play fair when their opponent received a picture of them.

Provide rewards that offer public kudos, are tangible and practical and are just plain fun.

Publicize actual donors’ names: People experience conspicuous compassion, and they donate because they want other people to perceive them as compassionate. For example, suppose that you’re crowdfunding a play. In the official program, publicize the names of donors based on their donation amount:

Incorporate many fun reward tiers: Kuppuswamy and Bayus analyzed all Kickstarter projects from 2009 to 2012. They found that successful projects offered a larger number of reward tiers. Incorporate as many valuable rewards as possible, assuming that you can deliver those rewards for a minimal investment.

“…the initial reward offered by the campaign may tend to serve as a contrasting reference point, and the additional rewards change funders or potential funders’ perceptions on the campaign and thus affect their pledge decisions.”

Attract early donors by sharing your crowdfunding project with your personal network.

Early contributors are vital to a project’s success, as the research on crowdfunding and social capital suggested. The researchers proposed three reasons for that influence:

If you’re running a crowdfunding project for a larger business, you might be tempted to only promote that project to your company’s audience. However, in doing so, you’d be excluding the most powerful audience, your personal network.

Maintain your project’s momentum by choosing a short time frame, offering rewards at certain milestones, and offering updates and reminders at regular intervals.

Kuppuswamy and Bayus analyzed 25,058 Kickstarter projects. They found that backer support falls into a bathtub shaped pattern. The majority of backers emerge in the beginning and end of a project lifespan: 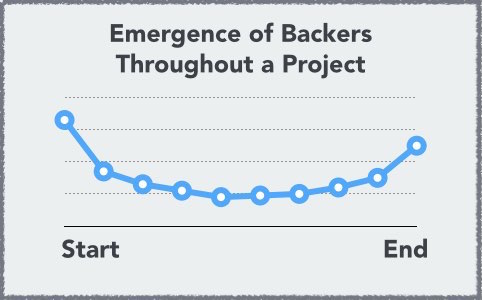 Choose a shorter project duration: a study on the dynamics of crowdfunding analyzed 48,500 projects and found that projects with shorter durations were more successful. Why? The researcher suggested that longer durations signify a lack of confidence.

Give free rewards at various funding levels: within the project description, you could describe different rewards that will be delivered during the project if certain increments are reached:

None of those rewards cost money. Yet they incentivize people to donate, even in the early stages of a campaign. You’ll also trigger more reciprocity. By giving everyone free rewards, they’ll experience a stronger obligation to donate. Provide reminders throughout the project:

One analysis found that projects are more successful when creators provide regular updates. 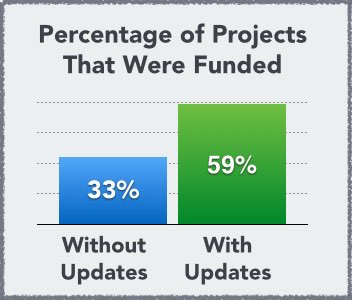 Among those updates, reminder updates generated the strongest influence. The researchers attributed that finding to the power of “the ask” in charity fundraising.

Target donors who can empathize: to maximize your donations, you need to target people who can appreciate the value and importance of your campaign. For example, people are more likely to donate to a charity fighting an illness if they know people who are suffering from that illness.

Use emotions in marketing