Test that new features work for real customers before you roll them out to a general audience.

Develop a hypothesis that you want to test.

Design an experiment that you can run without involving engineers.

The idea of a smoke test is to limit the amount of time and money invested before validation. So, your smoke test should be able to run without the help of an engineer. For example:

Drive the right traffic to your experiment by using social media, paid ads or other preferred channel.

If you’re testing a feature, you can simply send existing users to the smoke test. You may want to consider using segmentation, however. For example, perhaps you will only test the feature among active users who have signed in at least 3 times in the last 30 days.

Define your metrics and how you’ll measure them, and start measuring.

Be sure you have tracking in place and are measuring KPIs before starting your smoke test. You should know where people are coming from, how they’re behaving at each stage of the funnel, what device they’re using, etc.

Analyze the results and iterate or optimize.

If you fall into the testing a product idea from scratch camp, you likely do not have the traffic (and cannot afford the traffic) to make your test statistically significant. That doesn’t mean you can’t run a smoke test; it just means that it won’t be perfect and there is a lot of room for error, so take results with a grain of salt.

Use A/B testing and informal iterations of an idea to check your smoke test results. Sometimes, your first attempt at a smoke test will not pan out the way you thought. Continue iterating before giving up on the idea completely. For example, Suprizr promised to deliver a surprise meal based on your preferences within an hour. Here’s what the landing page looked like before: 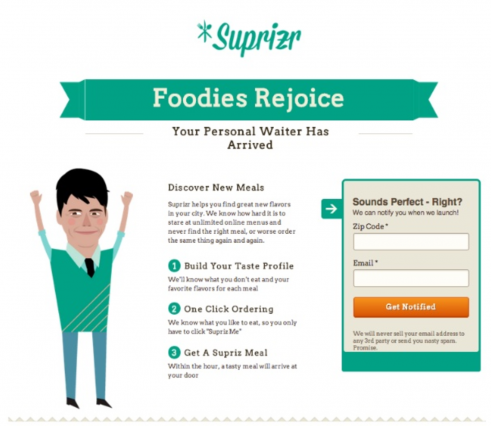 It had a <3% email capture rate. Instead of abandoning it altogether, Suprizr changed their approach by first asking for zip code: 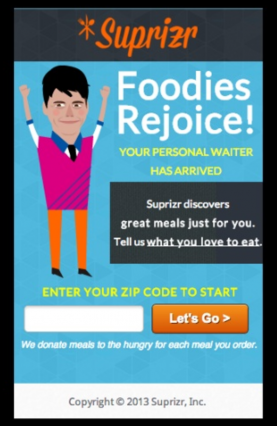 And then email, when they were told that Suprizr was not yet available in their area: 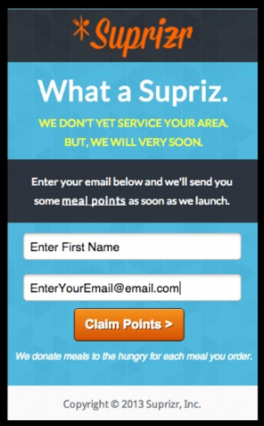 Make a decision within a pre-defined timeframe to avoid spending too much time fiddling with iterations.

Work with the data you have, make a decision on the result, document it, and move on to the next hypothesis.

Look for insights that you can draw out of your test results.