Find the ideal pricing structure for product plans and packages.

Plan out three different plans or packages around your product: the one you want to sell, a decoy, and an expensive premium option.

If your product is expensive, make your website look expensive. Dan Ariely describes this famous example in his amazing book Predictably Irrational. He came across the following subscription offer from The Economist: 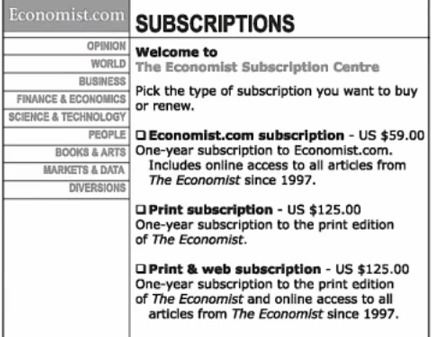 He removed it, and gave the subscription offer to another 100 MIT students. Most people now chose the first option! So the middle option wasn’t useless, but rather helped people make a choice. People have trouble comparing different options, but if two of the options given are similar such as the same price, it becomes much easier.

Create your decoy plan to be priced slightly lower than the plan you want to sell, but including considerably fewer features or less functionality.

When people were offered to choose a trip to Paris, option A, versus a trip to Rome, option B, they had a hard time choosing. Both places were great and it was hard to compare them.

Create your ideal plan to offer, in comparison to the decoy, far more features or functionality for a bit more cost, and end the price with a 9.

In a University of Chicago and MIT experiment, a mail order catalog was printed in three different versions. One version had a women’s clothing item listed for $39. Other versions offered the same item for $34 and $44. Each catalog was sent to an identically sized sample. There were more sales at the charm price of $39 than at either of the other prices, including the cheaper $34. The $39 price tag had both greater sales volume and greater profit per sale.

Marketing professors at Clark University and The University of Connecticut found that consumers perceive sale prices to be a better value when the price is written in a small font rather than a large, bold typeface. In our minds, physical magnitude is related to numerical magnitude.

Create an anchor plan at a much higher price than the plan you want to sell, but make sure it offers features or functionality that you can actually deliver.

Nothing is cheap or expensive by itself, but it is when compared to something. Once you’ve seen a $150 burger on the menu, $50 sounds reasonable for a steak. At Ralph Lauren, that $16,995 bag makes a $98 T-shirt look cheap.

Add some very expensive products to the selection that you don’t even intend to sell. If the final price of your product or service is a result of negotiations, start high. If you’re competing on price, state how much others are charging before revealing your price.

Test the pricing and composition of your plans with your target market, but don’t split-test price differences.

Consumers don’t tend to appreciate finding out that they’re receiving different prices to other customers, so be careful to show the same prices for each plan to all segments. A number of companies like Dell and Amazon have been caught in the past and got in trouble for showing a different price for the same product to different visitors.