Reduce the risk of psychological backfiring

Decrease your chances of your content creating negative attention and unwanted behaviors in your audience.

For example, when The Economist realized women make up a small portion of their online audience, they decided to run this example of mistailoring: 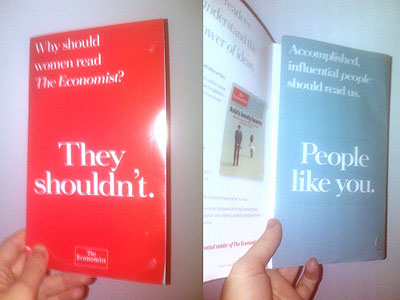 Obviously, they meant that The Economist is for everyone, regardless of gender. But since their audience is mostly male, it certainly didn’t come across that way.

Before making website or social media changes, A/B test with a small portion of your audience to limit the spread of any backfires.

If you think X will cause a behavior change of Y, test it on a portion of your audience before pushing it live to everyone.

When you find a variation that improves conversions, look for evidence of backfires using qualitative research like user testing, click maps, scroll maps, and surveys.

Record all backfires and refer to them before running future tests.

These records will help you to predict issues in the future. Prevention is better than cure.

If you still have control of a backfire and it’s causing an overall negative outcome, remove it.

Look for long-term backfires that might have an impact in the future.

Consider the people just outside your target audience. If you change the behavior of your target audience, that might influence the way adjacent audiences behave. An example is CrossFit: so many people love CrossFit that it puts off others who are “sick of hearing about it”. As a result, people who are interested in going to a gym might turn to GoodLife instead of CrossFit, of which they have now developed a negative opinion.

When you implement psychology, ask yourself: How will this impact my ability to scale?